What makes the Swiss army knife so special? The U.S. soldier, according to an extremely popular exhibition that was open until 27 June 2010 in the Musée de Prangins, near Nyon. 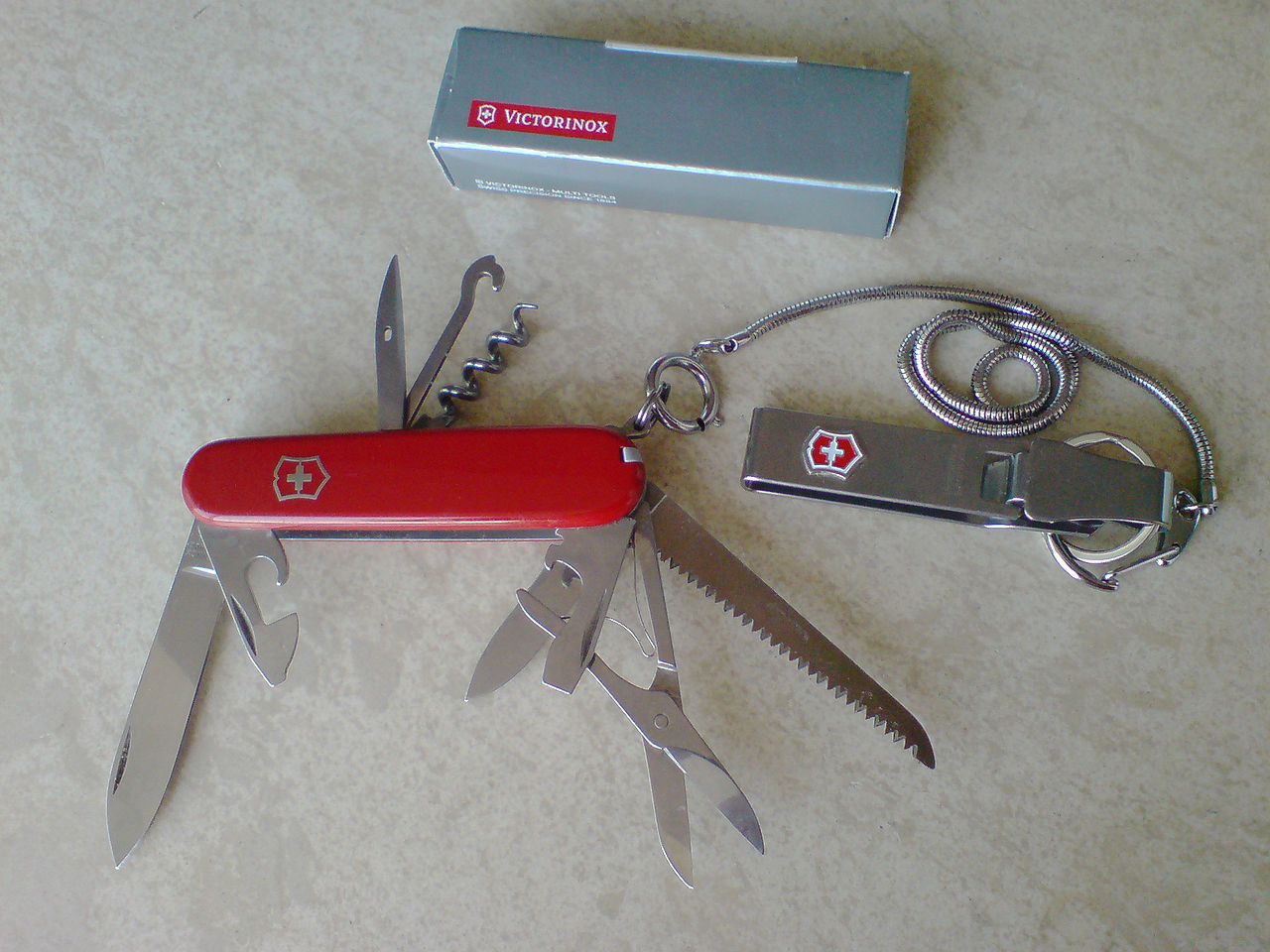 The Swiss army knife, we learn, got its name from American soldiers who bought the knife in military PX (post exchange) stores as souvenirs of their time in Europe.

It's said they called it the Swiss army knife because the U.S. servicemen had trouble pronouncing the official name, Offiziersmesser (officer's knife).

In fact, Swiss officers do not receive knives from the army. Recruits do, but the soldier's knife does not look at all like the gadget most of us buy in the shops. The real Swiss army knife, also known as the Soldatenmesser, is a 10-piece working tool designed to be opened with one hand (Sorry, the original photo of the Victorinox versions has gone).

The army knife we usually buy is a descendent of the 1891 officer's knife, which included a corkscrew (unlike the Soldatenmesser: guess who got the wine).

The original knife had a black handle, one big blade, a tin opener and a screwdriver. The Swiss military purchasers considered the corkscrew not "essential for survival", and so officers had to buy this knife individually.

The Prangins exhibition offered basically two rooms, one devoted to military knives of all kinds, showing little apparent connection with the Swiss army knife, and one to self-promotion by Victorinox, the Swiss-German company that took over its smarter French-Swiss rival Wenger in 2005.

The best background information came not from the exhibition but from an Austrian knife seller's website. There you can learn that blades have a Rockwell hardness rating of 56, which means very hard and a blade requires less sharpening.

2. Its can opener, patented in 1951, is the best available in a pocket knife, requiring no force and leaving the can top smooth.

3. Its knife is the only one where the aluminium separator adjacent to the corkscrew is anodized, making it hard and wear-resistant, while costing 2.5 times as much to make.

4. Two extra processing steps give the awl a sharp cutting edge so that it can cut a hole in leather, drill a hole in wood as well as tackling piercing, boring or sewing.

5. The rivets holding the knife together are reinforced by six metal heads (I can vouch for this as better than competitors).

6. The screwdriver is designed to prevent it from tilting in use, with the added advantage that it can be used as an offset screwdriver since it won't slip out of position.

7. All the teeth on the wood saw are ground to give a sharp cutting edge.

8. Surface hardening and a hard chrome-plate finish keep the metal saw sharp for a longer time.

9. The patented mini-screwdriver, housed in the corkscrew, is ideal for spectacle screws.

10. "Every part of a VICTORINOX pocket knife has been designed with its functionality in mind and not its cost."

Both the Museum of Modern Art in New York and the Staatliches Museum für angewandte Kunst (State Museum for Applied Arts) in Munich, Germany, include the Champion model and SwissChamp model in their collections of good industrial design.

Now for the science bit: For the blades the manufacturers use chrome molydenum stainless steel with 0.52% carbon, 15% chromium, 0.5% molydenum, 0.45% manganese and 0.6% silicium. After a sophisticated hardening process at 1040°C and an annealing temperature of 160°C the blades achieve a hardness of RC 56.

Since 1976 Victorinox has supplied the German army with its army knife, which looks similar to the Swiss but has a German eagle in place of the white cross. The one featured on wikipedia has since been supplanted by a spiffier model.

The legend of Victorinox is that it was started in 1884 to supply tools to farmers, and has been selling to the Swiss army since 1891. Before then the knives were made in Solingen, Germany, but the Swiss wanted a knife that soldiers could use to take apart their rifles.

They gave an equal contract to Wenger later in the decade. The white cross on a shield emblem has only been use since 1909. In that year the mother of Carl Elsener, the founder, died. He named the company Victoria in her honor. In 1921 Victoria became Victorinox with the introduction of "inox" (stainless steel) in products.

The design of the army knife remained unchanged between 1908 and 1951, when it was redesigned to enable soldiers to take apart a new rifle.

So Swiss army knives account for only 45% of its earnings. But Victorinox still produces 34,000 Swiss Army knives per working day and all but 10% of this production is exported.

Though the Prangins exhibition was designed by the Forum of Swiss History, Schwyz, it dealt more with the legend of one manufacturer rather than these details. Visitors were asked to pay for entry, too, which seems unusually mercenary for a Swiss national museum.

It was also selling Victorinox knives, at premium prices, while you can see a better range at lower prices in rue du Mont Blanc.

Wenger, the Délémont-based rival, hardly got a look-in. Yet it is Wenger that produced a $1,400 version of the Swiss army knife incorporating every tool it made (85 tools and 110 functions) for its 100th anniversary in 2006, and in 2010 offered an "Allinghi" knife for boaters, cashing in on the fame of the Swiss Americas Cup yacht.

Peter Hulm is Advisor on Innovative Journalism to the European Graduate School of Interdisciplinary Studies (Saas-Fee/New York) and maintains the switzerlandtoday.ch website.